Ilja Björs is a pioneer of Helsinki food culture. His internationally renowned restaurants haven proven that in addition to interior design, Finnish design is also well rooted in food design. His restaurants Juuri and Latva as well as the recently opened Juuri Café & Bar at the Design Museum represent local food culture and capture Finnishness as a part of their concept design.

Spend a day following in Ilja’s foot steps (or shall we say food steps?)  around the Design District, or pick your own favorites to visit from the list of his recommendations. 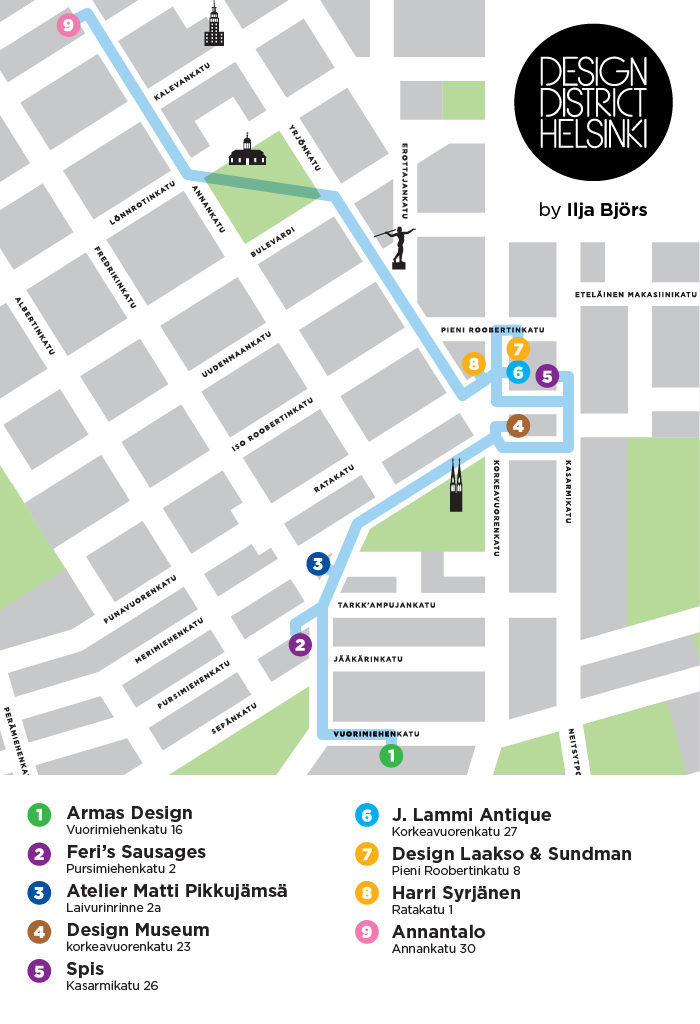 For me, the environment of my restaurant Juuri is like one big Design District in itself. I have learned to know the area of Kaartinkaupunki as my new home, and Design District Helsinki since it was founded in 2005. My restaurants have lived and grown alongside of Design District, and the cooperation of creative businesses in the area has brought more people and businesses onto the area. We are not each others’ competitors. The entity is so much bigger than any single player. Growth happens simultaneously on many levels and not only from one’s own know-how and doings. We want to be involved, as a business, in important networks; doing things together. Cooperation, in the end, is what builds the future, not our activities alone.

Armas Design is a close partner to my business. We’re both each others’ regular customers. The philosophy of my restaurants is taste, passion and origin, and this we express in everything we do. Therefore, Juuri and Latva’s chairs have been bought from Armas Design. We would always rather buy from our neighbor than from somewhere else, and from Armas Design’s selection we have found Scandinavian design that looks like our restaurants.

A Finnish-Hungarian couple’s concept Feri’s Sausages combines artisanal sausages with an art gallery. The combination may sound weird, but for me, linking craftmanship and design with cooking is a given starting point. I don’t like haphazard things. Professionalism in cooking is for me an art form among others, and in this concept, art is shown both in its more traditional form and in tasty sausages. I recommend their splendid products, which in the summer time are the number one choice for grilling, but fit any meal – why not a Hungarian style casserole as well.

I got to know Matti on our trip to Japan in December 2014. We were both involved in a Christmas street event that presented Finnish design know-how. I remembered Matti’s name as an illustrator for Finland’s leading newspaper Helsingin Sanomat, but it was during this trip that I got to know him as a person. Matti’s mission was to illustrate situations from the Christmas street event, and he decided to do it by painting portraits. Soon people were lining up for his portraits, and nowadays Matti paints portraits in his own studio in Helsinki. He has also painted one of my family. If you want an original image of yourself or of something important to you, and want it to represent who you are, Matti is the right person to go to. I value his faithfulness to his own style and creative freedom. A nice guy.

When we were offered the possibility of running the Design Museum’s café and of this location as an event space, we felt it was our duty to be involved. We want for Juuri Café & Bar to be the café that stays on the mind of a museum visitor and of which they say it’s exactly the café that should be in this location. We strongly feel that we’re in the right surrounding here and we are proud of this cooperation.

Juuri Café & Bar is our first café. We have been strongly involved in creating the concept with our own know-how, which shows both in the cafés visuality and its produce. We offer e.g. a Finnish microbrewery’s beer, our own imported wines, our own bakery’s bread and pastries. Craftmanship is present also here. As well as a haven for the museum’s visitors, the café also serves as a meeting place for locals.

Design Museum is an institution for the whole of Helsinki’s design network, and very especially for Juuri and Latva. Many travellers have found our restaurants after visiting the Design Museum. We probably wouldn’t have our current position without this support.

Restaurant Spis is a small, pittoresque free spirit. It has been strongly involved in the creation of the new Kaartinkaupunki area, driven by food culture. Its concept works, table reservation is necessary. This is a nice and intimate place that I recommend also for date nights. The food is Scandinavian, looks like its creators, and is vegetarian-oriented. The restaurant follows its own path and knows what it’s doing.

The Antique store J. Lammi is Juuri’s long-term, close neighbor. It has even moved its business space onto the other side of the staircase of our building to give more space for Juuri’s needs six years ago.

The shop owner Jyrki Lammi is a man who looks like his objects. I don’t understand very much about the religious antiques, archaic objects and intriguing oddities, but already a visit in the shop is an experience in itself, and will surely be remembered. So go say hi to Jyrki.

These two jewelry smiths’ shops have been Juuri’s neighbors since the very beginning. With their persistant work, they have also had an important role as developers of the area. Both represent distinctive handicraft, which is important to me. In both of them, the shop space is combined with a studio, so all the magic happens in that one spot, in front of the eyes of the customer.

Along the years, I have bought both from Harri Syrjänen and from Design Laakso-Sundman several presents for Christmases, birthdays and other occasions. Mariia Sundman’s timeless jewels look good on people of all ages. Harri Syrjänen also has handmade leather utility articles accompaning his jewelry line.

Annantalo is an interesting, imposing building in the middle of Helsinki. It’s a place dedicated to Helsinki’s children and families, and is certainly worth following. I have been several times with my own boys at Annantalo’s children’s events such as Simo Koivunen’s art workshops. Simo is a cartoon artist and Annantalo’s art teacher, but more familiar to me as my neighbor.

Creating memorable moments for your clients

When VIMMA and R-Collection joined forces the resulting collection was a tribute to old and new. Drawing inspiration from the …

Liike store is hosting a pop-up shop for Oona Ritari – the designer and founder of Mioona shoes and accessories. …